The Rolling Stones, television advertising and pop music in the 1960s

A few weeks ago, websites including MailOnline, Salon and others carried brief articles about the Rolling Stones recording a song for use in a 1960s Kellogg’s Rice Krispies television commercial.  I had been planning on writing a blog on the same subject for some time, but had not got round to it.  That’ll teach me to sit on my hands.  Anyway, this post aims to flesh out those articles with information found during the course of my research, and seeks to position the commercial in relation to both the Stones’ early career, and 1960s advertising culture.

In 2002, Fortune magazine called the Rolling Stones ‘an astounding moneymaking machine’, and noted that the band had generated more than $1.5 billion in gross revenues in the 13 years since 1989. Whilst a large amount of this came from ticket and record sales, the money brought in by licensing songs for use in television commercials was not to be sniffed at.  In the early 1990s, Mick Jagger and Keith Richards were paid $2.8 million after Allen Klein, who owns the rights to the song, agreed that a cover of ‘(I Can’t Get No) Satisfaction’ might be used as the soundtrack for a Snickers ad; in 1995, Microsoft famously shelled out a small fortune – possibly as much as $12 million[1] – for the use of ‘Start Me Up’ on a TV commercial for Windows 95.

The lure of advertising money had also proved to be tempting at the start of the Stones’ career, and in 1964 the band recorded a song used to advertise Kellogg’s Rice Krispies.  However, whilst the 1990s examples given above allowed the band – or those who controlled its music – to make money from its extensive back-catalogue during what Fortune called ‘a creatively fallow period’, the Rice Krispies ad features music written by the band specifically for the commercial.

The jingle was commissioned by the J. Walter Thompson (JWT) advertising agency, which handled the Rice Krispies account in the UK, and was recorded at Pye Studios, near Marble Arch, in London on 6 February 1964.  Who wrote the song?  Internal JWT documentation, held at the History of Advertising Trust, attributes the track to Brian Jones, one biographer claims it for Mick Jagger and Keith Richards, whilst Bill Wyman seems to imply a more collective effort, claiming that ‘we’ composed ‘a short Jimmy Reed-style track’.[2]  In the Melody Maker’s ‘Expert Advice’ column, Chris Hayes noted that Jones wrote the music ‘to words supplied by advertising agents J. Walter Thompson Ltd’ (17 October 1964, p. 16).  However, and whatever its provenance, given that the commercial featuring the song first aired on British television in mid-June 1964, the Rice Krispies jingle constitutes one of the first songs written by the Rolling Stones to be heard by British music fans.

The Rolling Stones were paid £400 to write and record the track, a sum that comfortably exceeded the nightly fee they might command at the time for playing live: on 24 January 1964, the band had been paid £273 to appear at the Wimbledon Palais, but more usually earned £125 a night.[3]  The rights to the work would be retained by JWT/Kellogg’s, and the contract – a copy of which, signed by Brian Jones and co-manager Eric Easton, was put on display in the Rock and Roll Hall of Fame in 2013 [scroll to bottom of this page] – stipulated that the recording could be broadcast twenty times, nationally, on ITV. 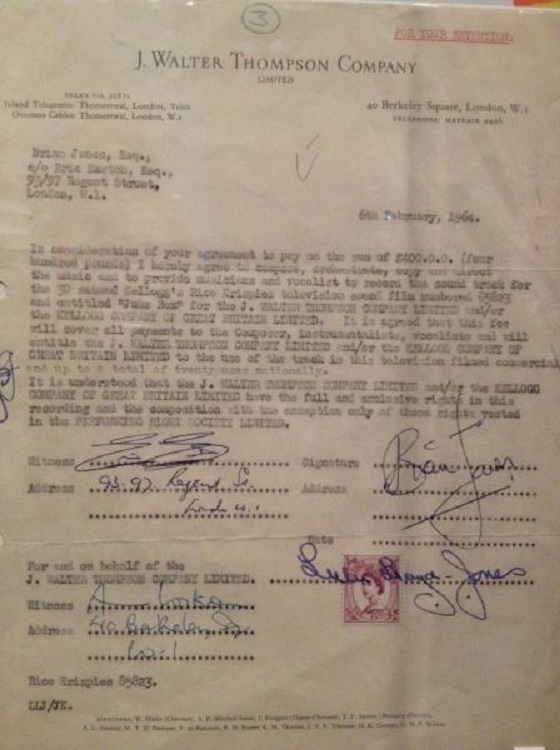 The money on offer was clearly a powerful incentive for the Rolling Stones to make the commercial, but we might ask why Kellogg’s, via JWT, approached the band in the first place.  Here, chronology seems important.  The JWT files are silent on the matter of exactly when the Rolling Stones agreed to provide the jingle, or whether Kellogg’s signed off on the Stones in particular or just a pop group in general, leaving the arrangements to JWT.  However, the date of the recording session makes it likely that the band’s management was approached in late 1963, or very early 1964.

This was perfect timing.  The band was at this point not exactly unknown – its second single, the Lennon-McCartney penned ‘I Wanna Be Your Man’, had been released in November 1963 and had reached the top 20 by mid-December – but neither was it fully and confidently established.  Whilst one biographer describes the contractual obligation to provide music to Kellogg’s as ‘a troubling matter’, presumably on the basis that the band were either too big or too cool to lay down a track for breakfast cereal, neither Wyman in his memoirs, nor Stanley Booth in his True Adventures of the Rolling Stones, seem to regard the job as an embarrassment.[4]  Rather, it seems that bringing in additional revenue, whilst gaining more exposure, was too good an opportunity to pass up.  Had the offer come much later, the band might have fought shy of recording a jingle for Rice Krispies (‘Not Fade Away’, released in late February 1964, reached number three in the charts and announced the Stones as major players).

What’s more, in early 1964, the band’s ‘bad boy’ image, carefully cultivated by Andrew Oldham, was not yet altogether entrenched.  It was only in the month after the jingle was recorded that the interview that led Melody Maker to ask ‘Would you let your daughter go with a Rolling Stone?’ was conducted, and the myth of the band as arrogant, insolent, scruffy and threatening was only fully realised the following year when Bill Wyman was fined following an incident during which he urinated against a garage wall in Romford whilst the rest of the band reportedly chanted ‘We piss anywhere, man.’  Although the Rolling Stones are only heard but not seen in the commercial, had the band already become infamous, Kellogg’s might have been wary about allowing them to become associated with Rice Krispies, a brand that had for years been aimed at the parents of young children, and which might therefore have been sensitive to parental attitudes.[5]

The song that the Rolling Stones recorded for Kellogg’s appeared in two separate commercials.  The first of these, ‘Juke Box’, was a cartoon produced by Richard Williams Animated Films. I have not been able to track down a copy of the film, but a review of it in Television Mail (19 June 1964, p. 17) gives a sense of what it looked like: Rice Krispies ‘had the beat look … using their cartoon goblin character to great effect, the cutting was superb but may have been a little fast for the average viewer to absorb.’

The second ad was entitled ‘Stones’ and was directed by Ron Wyatt, with cinematography by Stan Pavey, for Keith Ewart Films.  ‘Stones’ was first broadcast in September 1964, and is easily accessible via YouTube (although in many instances it has, confusingly, been identified as ‘Juke Box’).  None of the versions that I have seen online include an opening voiceover mentioned in the JWT files.  After an obligatory 1½ second silence, during which time a single is shown being lowered onto a turntable, we hear a commentator saying ‘It’s that top pop of the morning – Rice Krispies’ whilst a bowl of the cereal revolves on the turntable.  The commercial is a pastiche of the BBC’s long-running Juke Box Jury, which on 27 July 1964 had actually featured the Rolling Stones as guest panellists – an appearance which had, perhaps a little unfairly, helped to develop their dismissive and loutish reputation.

The JWT files do not provide an answer about whether the ‘Stones’ commercial was conceived before or after the band’s appearance on Juke Box Jury, and so cannot tell us whether the second Rice Krispies advertisement constitutes an attempt to cash in on their increasing fame and notoriety.  The timing and theme seems to me to be more than simple coincidence, though.  However, the fact that another payment of £400 was made to the Rolling Stones for ‘additional use’ of the tracks recorded for ‘Juke Box’ suggests that idea to use the song twice was not necessarily in place from the start.  It was also after ‘Stones’ was broadcast that Melody Maker informed its readers who it was that could be heard playing on the commercial.

The advent of Beatlemania during the second half of 1963 had clearly focused advertisers’ minds on the possibility that pop music might boost sales.  The same week that ‘Juke Box’ came out, so did a Timex ad shot on location at Liverpool’s Cavern Club and, as this blog shows, throughout the 1960s many pop and rock acts would record music for use in television commercials.  The ads soundtracked by the Stones were therefore part of a much wider trend.  Rice Krispies, however, went all in, and for a period built its British advertising strategy around youth-oriented music: ‘Using pop music themes and personalities, Rice Krispies was presented as an unusual, exciting breakfast eaten by gay, “with-it” young people.’[6]