The latest in our series of guest posts is by artist, professor and experimental film maker Steve Hawley from the Manchester School of Art. Professor Hawley writes about the Boulting Brothers’ The Family Way (1966), a film which seems indeterminately poised between the Swinging Sixties and the kitchen sink. Historians are often apt to see the sixties as an era of contradiction – a time when intense social change in some parts of Britain clashed with more old fashioned, traditional values in others. Professor Hawley’s work shows that these attitudes are very much reflected in a film like in The Family Way, released at the height of Swinging London and yet espousing as it does traditional sexual mores and values at a time of sexual and social revolution.

The Family Way is one of the more underrated British films of the sixties. Made in 1966, it was too late to surf the wave of enthusiasm for northern working-class films of the early part of the decade such as Room at the Top, and it was also considered a failure as a Roy Boulting film. Most critics thought it lightweight compared to the social issues films made by the Boulting brothers in the late forties and even their satirical comedies of the fifties – David Thomson says the later work of Roy is “particularly disappointing” (Guardian obituary 2001). Stuck between the kitchen sink and mild Swinging Sixties sex comedy (although there is almost no sex in it), it failed to achieve traction as a significant film of the decade, and is remembered mostly for the “daring” shot of Hayley Mills’ behind (the tagline was “Hayley isn’t playing kids games any more”), and Paul McCartney’s first film score.

But the film can be better understood in its mores as a domestic story formed by the attitudes of the nineteen forties and fifties, rather than the era of free love and the pill. Bill Naughton, the writer (Alfie, Spring and Port Wine), was born in 1910, and only turned to writing full-time after a career as a coal bagger and lorry driver; already fifty when he wrote All in Good Time, the play on which the film was based, his roots were firmly in the Bolton of his youth. The story of Arthur Fitton, and his unconsummated marriage to the virginal Jenny (Hayley Mills fresh from childhood acting in Disney films), reflects a puritanical and patriarchal attitude to sex, where shame is just round the corner, especially when the whole of Bolton finds out about Arthur’s failure. The attitudes expressed seem of another age, and when All in Good Time was revived recently as a stage play and film it was set in the contemporary Asian community, a place where the fixed social and family roles still resonate.

Jenny chatting to her mother and friends after the wedding is reminded “never show pleasure, you know what I mean”, “not that there ever is much”. But sex is not the only taboo in the Fitton household. “It’s a bit early for that isn’t it?” Ezra says to Arthur as he reads a book at the breakfast table. “All that reasoning and thinking, it’s not natural”. Ezra according to the play script is only fifty (Naughton’s age when he wrote it), but he’s not the sort of fifty year-old who goes to U2 concerts and buys a Harley Davidson. In his waistcoat and fob watch and his concern that Arthur’s failure might “leak out at the gasworks”, he seems more a character from an Edwardian age.

Sex came late to Bolton, even later than it did for Philip Larkin in Hull, and a few years later across the Pennines it was still something to be avoided. In the play written five years earlier the women go further. All “men are beasts”; “Oh no that’s dirty – enjoyment”. But Ezra, unconsciously at least, is more ahead of his time than he thinks. As we gradually realise that Arthur is most likely not his son but that of his idolised boyhood pal Billy, Ezra’s relationship with Billy takes on homoerotic undertones. The Family Way portrays youth on the cusp of the Swinging Sixties, but that era seems not just 150 miles down the as yet unbuilt M6, but rather still a generation away in the future. In fact, in this the film more accurately represents the Britain of 1966, where for all the dandies marching down the Kings Road, aside from a square mile of the capital, sexual and societal attitudes stayed rooted in post-war conservatism, especially in the north.

The choice of Paul McCartney to write the music was an intriguing one. The Beatles were in 1966 in the vanguard of a world “Revolution in the Head” the title of Ian MacDonald’s seminal book on their work, but McCartney himself often harks back to an earlier age when his father Jim played the trumpet, and his granddad the E flat bass in a brass band. Liverpool lies halfway between Bolton, where the film is set,  and the Isle of Man where Bill Naughton lived the latter half of his life. McCartney wrote something “brass bandy” as he put it, to consciously echo his northern roots.

The two key relationships explored by the film are of a father and son (Ezra and Arthur), and father and daughter (Jenny and her adoring father Leslie). In a curious confusion of these roles in real life, Ezra was played by John Mills, the real-life father of Hayley, who then married Roy Boulting the director, more than 30 years her senior. The Family Way is a film about masculinity in transition: nine years after the Wolfenden report and a year before the 1967 Sexual Offences Act decriminalised homosexuality, attitudes to the possibility that Arthur might be gay, whilst denied (“Nothing odd or queer about our Arthur”) were also surprisingly liberal. Ezra’s wife Lucy affirms that “a father should help and protect a lad like that, not turn on him like the mob would”. 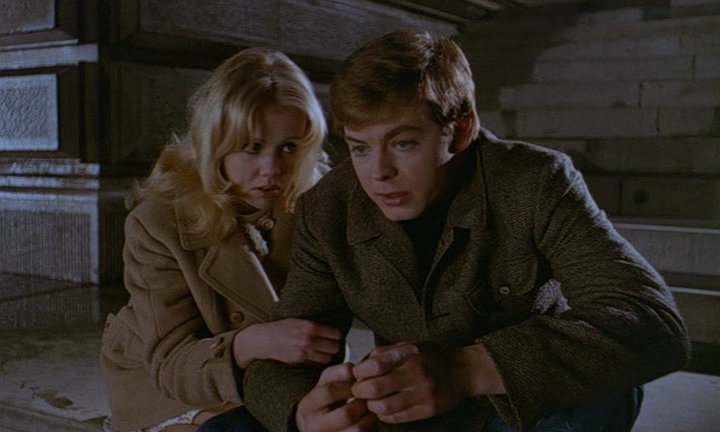 Sex when you’re not having it is all over the streets of Bolton. On a night-time walk home with Jenny from the cinema where he works as a projectionist, past a snogging couple, Arthur is confronted by the literal signs of his impotence; Viroids stimulate strength, Love Spells Happiness. Even the wayside pulpit admonishes “The spirit is willing but the flesh is weak”. But this northern kind of sex is something to be warned against rather than enjoyed. The film within a film that Arthur projects at the cinema where he works, is Morgan, a Suitable Case for Treatment, also made in 1966, and like The Family Way produced by British Lion Films (and directed by Karel Reisz who five years earlier had made Saturday Night and Sunday Morning). Arthur looks on dejectedly as David Warner leaps onto Vanessa Redgrave in her fashionable London flat. He stares through the projection glass at a world and a set of attitudes far distant; a swinging London of eccentric art students and middle class subversion. It might as well be on the moon.

Morgan, for all its experimental black and white surrealism, has fared much less well over time in my view than The Family Way. What gives Boulting and Naughton’s film its enduring power is its carefully drawn depiction of father son relationships and the subtle and convincing performances, especially Marjorie Rhodes as Ezra’s much wiser wife Lucy. Out of its time when it was made, at fifty years distance it now seems timeless in its portrayal of families and the complexities and contradictions of sex. As the vicar at Arthur and Jenny’s wedding opines, “And they too shall be one flesh. This is a great mystery”.